When people talk about drug and alcohol abuse, the terms substance abuse, dependence and addiction are often implied as being one in the same. While many people use these terms interchangeably, there are differences between them in regard to how people progress with this complex condition. This article will lay out some ground rules with some more specific definitions. No matter the semantics, substance abuse and addiction are serious matters.

The guide universally considered the primary reference tool for mental health practitioners is the Diagnostic and Statistical Manual of Mental Disorders (DSM). DSM contains descriptions, symptoms, and other criteria for diagnosing mental disorders. It provides a common language for clinicians to communicate about their patients and establishes consistent and reliable diagnoses that can be used in the treatment and research of mental disorders. (APA, 2014) This is the primary source for most of the information you will read here.

The Primary Differences Between Substance Abuse and Substance Dependence

The typical Substance Abuser is someone who engages in recurrent, but consequential periods of recreational binges. This is in contrast to the continuous and compulsive pattern of use that is typical of Substance Dependence. 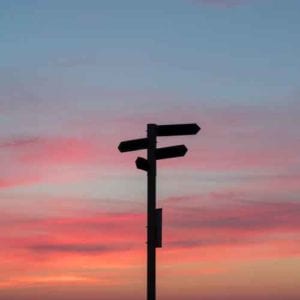 At the extremes, the differences between abuse and dependence are clear-cut. The Abuser goes through periods of indifference, using the substance in a controlled way or abstaining from it altogether. An opportunity and/or desire will eventually return to an active period of binging, followed again by the same habit of abstinence. The individual doesn’t learn from experiences for example, that a couple of drinks (or snorts or pills or joints) can lead to a binge and a binge can, and often does, have serious (even catastrophic) consequences.

Substance Abuse is distinguished from run-of-the-mill recreational bingeing, which, while dangerous, does not qualify as a mental disorder. The definition of Substance Abuse requires that there be “a maladaptive pattern of substance use manifested by significant adverse consequences” in at least 1 of 4 different domains:

1. Driving under the influence

3. Reduced performance at work or school 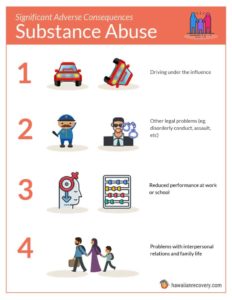 Substance Abuse can be the first step on a path that eventually leads to Substance Dependence. The threshold between the 2 is crossed when the periodic bingeing turns into continuous use and the motivation switches from pleasurable recreation to requiring the substance to function. Substance Dependence requires some combination of tolerance, withdrawal, and a pattern of compulsive use. Tolerance equates with a diminished pleasurable return—increasing quantities of the substance are necessary to achieve the desired effect. Trying to reduce or stop the usage of the substance leads to unpleasant (and sometimes dangerous) symptoms that will compel one to start using again. Compulsive use creates a craving to obtain satisfaction (i.e. a hit) regardless of and mindless of potential consequences.

Addiction is a complex condition that progresses in stages. It is important to differentiate the terms abuse, dependence, and addiction as at pertains to this continuum. The following are solid definitions for each term:

Substance abuse can be simply defined as the excessive use of a substance that is beyond its intended use. This is commonly seen with those who abuse prescription painkillers and alcohol. For people who abuse drugs, they do so to desire a certain feeling of euphoria, peace or calm. If people continue to use drugs and alcohol in this manner, it will lead to substance dependence.

When people become drug dependent, their brains have adapted to constant exposure of drugs. As a result, they will not function normally unless drugs and/or alcohol are in their system. If at any point a person decides to abruptly quit using substances, they will experience physical and psychological withdrawal symptoms.

Depending on the substance, length of use, quantity, and any underlying medical issues, these withdrawal symptoms can range from being a nuisance and uncomfortable to being life-threatening. Unless a person seeks professional help, they will go back to using their drug or drugs of choice in order to halt their withdrawal symptoms. 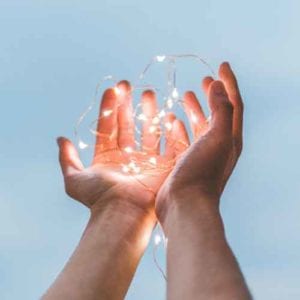 Simply defined, addiction occurs when a person displays compulsive behavior as a result of their drug and/or alcohol use. People who struggle with substance abuse show a loss of control in abstaining from substance use. The process of finding, getting and using their substance of choice supersedes all other responsibilities the person has towards themselves and others.

Ultimately, their behavior has negative consequences in their life. Despite these consequences, people who suffer from substance abuse continue to use it. As their use continues to spiral out of control, they may lose their job, put an unbelievable strain on their family and friends, and run into increasing legal trouble.

Substance addiction is a growing issue in the United States that impacts millions of people and their families.

– In 2006, nearly 1.8 million Americans were admitted to drug and alcohol treatment facilities.

– Preliminary data for 2009 from the CDC show the highest percentage in a decade measured for adults who have consumed more than 5 drinks a day (23 percent).

– Individuals treated for alcohol misuse are approximately 10 times more likely to commit suicide than those who do not misuse alcohol, and people who abuse drugs have about 14 times greater the risk for eventual suicide.

Yet, there is good news about recovery.

Getting Help for Substance Abuse and Addiction

Addiction is a serious matter, and it can be a life or death matter. In order to stop one’s substance abuse, they must seek professional help. More often than not, addicts will try to quit on their own through their own self-detoxification methods. As stated before, withdrawing from substances often produces withdrawal symptoms that are uncomfortable and painful to endure. If an addict is abusing other drugs or has an underlying medical condition, the withdrawal symptoms they experience can be life-threatening.

In order to stop addiction in its tracks, people need drug treatment. Through the help of experienced professionals, addicts can get the tools and support they need to address their addiction and move towards lifelong recovery. Drug treatment programs include medical detox services, individual and group therapy, 12-step group support (or similar sober support groups) and life and coping skills training among other things.

Additionally, drug treatment programs need to feature programs that help newly recovering addicts build upon the skills they learn while in treatment. These include sober living, intensive outpatient treatment, and alumni groups.

If you or a loved one need substance abuse help, call Hawaii Island Recovery today. They feature the programs and quality care that will help you deal with your substance abuse for good.