Home Rehab Blog & News What is Codependency in Alcoholism?

What is Codependency in Alcoholism?

The meaning of the word codependency has jumbled up over the years. No used to describe nearly anyone in a dysfunctional relationship, it initially described behavior patterns developed after
dealing with an alcoholic. Codependency in alcoholism is difficult to overcome but you can learn how.

Codependency in alcoholism is commonly seen in the relationships of someone with a drinking problem. The meaning of the term broadened over the past few decades to incorporate many types of dysfunctional relationships. But it was initially created to describe the behavioral patterns seen in the people closest to alcoholics.

Not everyone with an alcohol use disorder, the medical term for alcoholism, drinks the same. Some people are functional alcoholics who don’t need much help from those around them. They hold down their job, manage their family duties, and make it through with some room to spare.

Though there’s likely still some level of codependency in alcoholism with these relationships, it’s not as noticeable as others. Alcoholics who cannot manage their day to day lives usually rely on those closest to them to handle their problems. This is where codependents come into the picture. 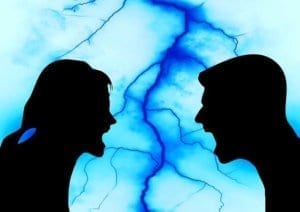 Codependency describes the behaviors developed by those closest to an addict. Codependent people may think they’re helping their loved one, but are they?

What is codependency in alcoholism? How do you know if you’re in a codependent relationship? And what can you do to get out of it? Continue reading to understand the connections between alcoholism and codependency.

The Relationships of Codependency in Alcoholism

The meaning of the term codependency has broadened over the years. It’s not a disorder in the same way that bipolar disorder, borderline personality disorder, or alcohol use disorder are. There isn’t an entry for it in the Diagnostic and Statistical Manual of Mental Disorders (DSM-5). Instead, it’s more an agreed upon set of personality traits and behavioral patterns.

Codependency affects a person’s ability to form healthy and functional relationships with other people. The Adult Children of Alcoholics (ACA) program was one of the first to use the term. True codependents usually learned these behaviors during childhood, either from
directly taking care of an alcoholic or watching a parent take care of one.

Sure, you might see some codependent behaviors in anyone you look at. Some rely too heavily upon their partner or enable their partner’s less desirable actions. True codependency in alcoholism, though, affects nearly every relationship in a codependent person’s life. Whether it’s with their children or with their boss at work, they seem to
navigate the world looking through a strictly codependent lens.

Codependency in Alcoholism: Signs to Look For

Codependent people are usually described as controlling or bossy. They seem to need to have some level of say in everything that takes place. They’re usually the ones making plans and decisions for those around them. This might come off as frustrating to some but for the codependent individual, the control means safety.

Their controlling behavior results from receiving overwhelming amounts of
responsibility from a young age. When the alcoholic in their life is a parent, they don’t receive the necessary help from that authority figure. They take on the responsibilities, or “control,” to make sure things get done around the house while their parent is under the influence.

Another common sign of codependency in alcoholism is the compulsive need to rescue or enable. People closest to the alcoholic help them out of scrapes and situations that might land them on the rocks. They might provide
a place for the alcoholic to live, pay bills, or make excuses for their unexplained absences or poor behavior. Codependents save alcoholics from themselves as a way of showing their love.

Codependents have a difficult time setting healthy boundaries because they never learned to set them in the first place. It’s a parent’s job to allow their child space to learn what is and isn’t for them. They’re also responsible for teaching their child how to say “no” when something steps over their boundaries.

Instead, a codependent person’s natural boundaries were regularly
invaded, especially by those they cared about. They never learned to say no if something overstepped their boundaries. Codependents had to take what came and learn to navigate life despite the discomfort. This behavior is one of the most challenging parts of codependency as an adult.

Difficulties with Exerting Themselves

Those who developed codependency in alcoholism usually weren’t often asked for their opinion. Instead, they conformed to whatever took place around them and went with the flow. They didn’t have the opportunity to develop a sense of self or learn what they liked and didn’t like. Usually, they just adopt and accept the preferences of those around them. Exerting themselves or sharing their opinion makes them feel like a burden. 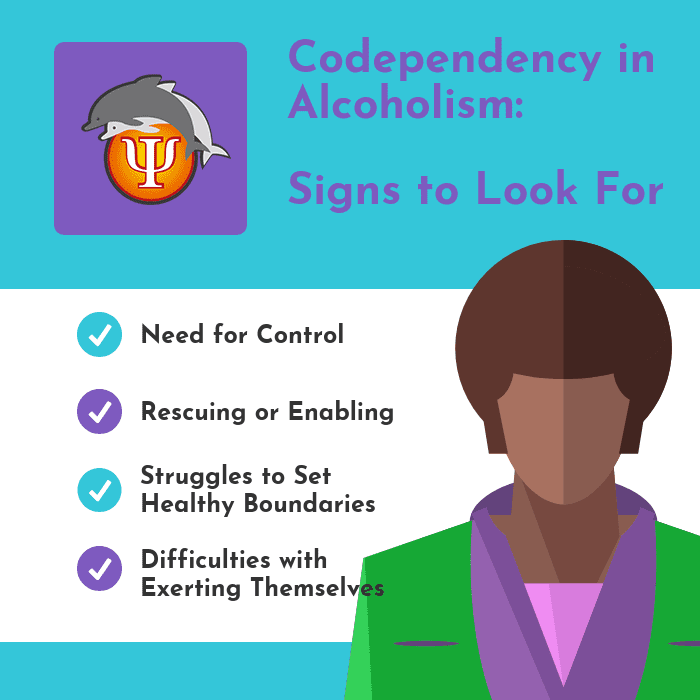 Codependency in Alcoholism: Signs to Look For

Years of emotional injury lead codependents to develop the behaviors that
helped them survive. It’s not as simple as “just stopping.” In the same way, an alcoholic or addict can’t “just quit,” a codependent person needs support and treatment to separate from their old ways of thinking and acting.

Codependency isn’t necessarily a condition that benefits from medication. The resulting depression and anxiety might dissipate with the help of medication but it won’t touch the underlying problem. Instead, intensive and focused therapy offers the best results. Codependent individuals need the space to learn to be themselves.

Sometimes those who developed codependency in alcoholism grow up to be alcoholics themselves. They walk a strange line between codependency and active alcoholism, where people usually do what they want. Addiction and alcoholism treatment helps treat this interesting blend of behavioral patterns.

If you’re looking for treatment for codependency, alcoholism, or another addiction or mental illness, Hawaii Island Recovery can help. Our facility on the Big Island of Hawaii specializes in helping individuals overcome their addictions and mental health conditions. Whether you prefer a traditional, alternative, or blended approach to
treatment, we can help.