Learning More About the Effects of Depression on the Brain

While many people nowadays understand what depression is, scientists are diving into the long-term impact that untreated depression has on a person’s brain. It seems that every year Americans are becoming more aware and considerate of individuals with mental illness and other mental disorders. Over time, the general public has gained a greater understanding of depression and anxiety, two of the the most widespread and pervasive mental illnesses.

According to the Anxiety and Depression Association of America (ADAA), depression is the leading cause of disability worldwide. Research estimates that about 6.7 percent of American adults ages 18 and older, or 16.2 million people have experienced at least one major depressive episode.

Researchers continue to develop a deeper understanding of depression each year. The detrimental short-term effects and their impact on an individual’s ability to function in everyday life are clear. However, a recent study looked into the long-term effects of depression on the brain when the illness goes untreated.

Continue reading to learn more about what depression is, how it impacts a person’s life on a daily basis, and the lasting effects depression has on the brain when left untreated.

The definition of depression is commonly understood and accepted nowadays: usually referred to as clinical depression or major depressive disorder, it is defined by a severely depressed mood. The symptoms affect how you feel, think, and manage your life on a daily basis.

People who struggle with depression have a difficult time carrying out even the simplest of everyday tasks. Working, going to school, taking care of personal hygiene, or even getting out of bed become insurmountable obstacles. The drive to get through the day is always limited and often nonexistent. 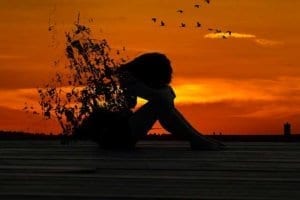 Get Help to Cope with Depression

Someone diagnosed with major depression, experiences signs of depression nearly every day for at least two weeks. Their symptoms interfere with their ability to carry out basic tasks like working and studying, and they often impact your ability to sleep or eat.

These episodes of major depression may occur only once as a result of a life experience, but often an individual will experience multiple episodes.

At one point called “dysthymia,” persistent depressive disorder refers to an individual experience symptoms of depression for a minimum of two years. During this time the person often experiences many episodes of major depression, mixed with periods of time where their symptoms are less severe.

As they become accustomed to their depressed mood, these individuals learn to manage their daily life to some degree. Despite their ability to function somewhat regularly, their low energy, low self-esteem, and general hopelessness follow them throughout the day.

A single episode of major depression can often be attributed to a significantly impactful event that takes place in someone’s life. Whether it is the death of a loved one, a traumatic event, or some other type of catastrophic occurrence, people can fall into a depressive episode.

However, persistent depressive disorder is commonly attributed to a chemical imbalance in the brain. However, continued research has revealed that it’s not as simple as one or two chemical levels gone awry.

There are many numbers of chemicals that work together to affect and alter an individual’s mood. Additionally, scientists have determined specific genes that have shown signs of making an individual more vulnerable to the effects of depression on the brain.

The current understanding is that an when an individual is severely depressed, something is off in their usually finely-balanced system. Their receptors are either hypersensitive or insensitive to a particular neurotransmitter which results in an overreaction or an underreaction. Since there are many numbers of neurotransmitters at play in emotional regulation, the specific neurotransmitter varies in each case.

Untreated Long-Term Effects of Depression on the Brain

Forbes recently published an article on the results of a study released in February 2018. Researchers determined a link between inflammation of the brain and long-term depression. A relatively low level of inflammation in the brain is normal in order to help protect the body and repair it when it is injured. Too much inflammation tends to influence the development of chronic illnesses.

In the admittedly small study, they noticed that those with long-term depression experienced higher levels of brain inflammation. While the study pool is still too narrow to make widespread conclusions, this research will undoubtedly spur further studies on the long-term impact of depression.

How to Treat Major Depression and Pervasive Depressive Disorder

Depression, whether a two-week depressive episode or a two or more year pattern of depressive symptoms, can be treated. While there is not necessarily a “cure” for depression, symptoms can generally be managed enough for a person to live their life relatively happy. But in order to avoid the potentially harmful effects of untreated symptoms, seeking treatment is helpful.

Through a combination of therapy (usually cognitive behavioral therapy) and medication management, people can learn to live with the symptoms of their depression. There is no catch-all medication to lessen the effects of depression on the brain. But psychiatrists have numerous medications to try in order to find the most helpful and effective dosage for treatment.

If you are looking for to learn how to handle your depression, treatment facilities like Hawaii Island Recovery can help. Call our admissions office to learn more about our highly qualified staff and the options available to give you the chance at living a happy life, unchained from the symptoms of your depression.